Sometimes I Lit The Match 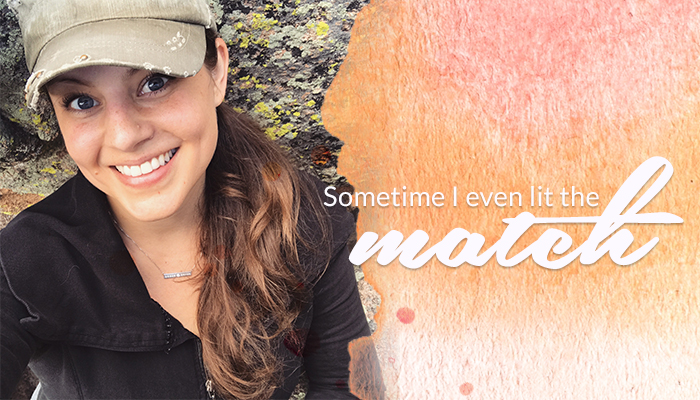 “You do that a lot,” she said matter of factly. “You have this desire to get right to the core of stuff and just sit in it to see what’s there. I like to kinda dip my toe in and see how it goes.”

What I was choosing to do in that moment wasn’t funny though. Far from it. It hurt my heart, big time. Everything about it was awful and painful and I was absolutely reeling as we talked.

Just last week I decided to stop operating from a pattern that is deep and old and all things wounded. I could barely talk as I recognized and owned how deep and wide that pattern ran. How intertwined it was in almost every relationship of my life. How I leaned on it as a way to avoid and cope.

And once I realized what I was doing, where it was showing up, and what it was holding me back from creating, I stopped cold turkey. I cut every tie to that way of being off at the knees. I burned it to the ground and I’m navigating my way out of the ashes and onto what’s next.

Bam. Done. No more of THAT.

I wasn’t always this way though.

I used to approach change and growth cautiously, slowly, intentionally.

Until someone I loved died in a very traumatic and life-changing way. Loss sucker punched me in the back of the head and began stealing pieces of me, my life, and my business before I knew what was happening.

There were some changes I embraced fully and completely, because I simply didn’t know how to be who I was before anymore. I just couldn’t function that way. But certain changes I resisted, and I resisted hard.

But as everything slowly and painfully died no matter what I did, I realized I had to let it all go. There was no other way forward.

Never before in my life had there been a time when I was more willing to let it all burn to the ground than in that first year after my loss.

In the years past I would resist, retreat, numb out, hide, or try forcing things to go a certain way. All because I was so afraid of letting go that I would latch onto whoever and whatever was in my life with a white-knuckle grip. Terrified of the unknown that would come once everything known was gone.

But not that first year.
That year I let it all burn.
Sometimes I even lit the match.

And you know what?
It was the most transformational experience of my life.

I learned there’s freedom that comes from loss and massive power in surrender. There’s beauty and a depth of connection we’ve never known inside the voids that remain when people and things burn away. I found that there’s clarity and guidance inside the deepest, darkest pockets of the unknown. There’s peace and joy inside the stillness and emptiness as the ash settles at your feet.

The more I listened to what was being asked of me—what wanted to move through me—instead of stubbornly and fearfully “sticking to the plan,” the more aligned my work became. The more aligned I became.

The more willing I was to let what was dying burn to the ground, the higher and more quickly I began to rise.

It’s the most pivotal aspect of Journey Mapping™.
It’s everything for moving into what’s next.

But it’s not easy to navigate if you don’t understand the process. If you don’t know how to discern between what’s meant to be worked through, and what’s meant to be released. If you’re not able to surrender in total trust and faith to the path you’re walking, allowing things to unfold as they’re meant to.

This is one of the hardest skills I’ve ever had to cultivate, but it continues to serve me to this day… which is why I created Journey Mapping™.

The flames of death and rebirth are all things cleansing, beautiful, and life-giving, and I want to show you how to walk through the flames with more ease, purpose, and trust than you ever knew you could have.

You are far more capable than you know.