There’s Too Great a Cost 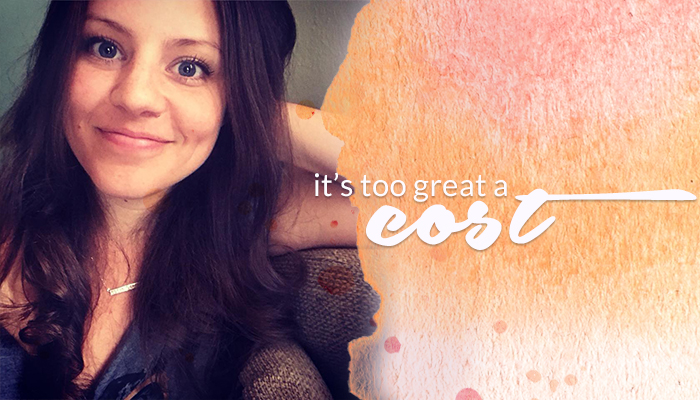 “What’s the avoidance around?” she asked as I clearly started checking out of the conversation. I could barely keep my eyes open, which is always a sign that my nervous system is completely overwhelmed.

“There’s too great a cost,” I finally shared. “That’s at the root of me not showing up fully. It’s not worth the price I’ll have to pay.”

When I was 15 I learned there was a price for having wants and needs. For showing up fully as myself. For setting boundaries and taking a stand for what felt right and true. A big one. Physically, emotionally, financially. I had to really want it… because I was going to pay for it until the end of time.

I learned that it was safer to stay small, quiet, and out of sight. That the only way to survive was to bend and fold and fit myself into whatever was expected of me. Whatever was wanted or needed in any given moment. To compromise myself to the point that there was nothing left.

I was young and “in love.”
I simply didn’t know any better.

After nearly seven years, it took everything in me to leave. Even then, I paid dearly for choosing to honor myself. It’s been well over a decade and I still feel the ramifications of making that choice. The impact it had on my life, relationships, and finances was significant.

I saw him many years later in a hardware store. We had been apart more years than we were together, but I remember turning to walk down an aisle and immediately—instinctually—I froze. I disappeared. I made myself small and insignificant, because that was the only thing I knew how to do to stay safe. I was so conditioned to disappear that it happened before I even realized it.

A year after that trip to the hardware store, I would set another boundary. A boundary that broke my heart to put in place… and two days later, someone died. You don’t have to tell me it’s not my fault. I know that. And still, setting that boundary was a piece in the heartbreaking puzzle that lead up to his death.

So, yeah. When I tune into why I don’t show up fully, of course my body, mind, heart, and soul respond with, “there’s too great a cost.” Because that was my reality and experience for a very good portion of my life.

It’s an explanation, not an excuse.

Once you realize what’s at the root of your fears, blocks, patterns, and beliefs, you have to make a choice. Continue playing small and allowing the past to influence the future, or choose to navigate towards something new, something different, something better.

There’s only one way for me to learn that it’s safe to show up. That I won’t get hurt and no one will die… and that’s to start showing up. To express my desires and commit to bringing my vision to life. To express my wants and needs, while also setting clear boundaries. The only way to learn that these things are safe is to feel the terror of showing up—and to keep doing it anyways. To push my edges, little by little. To ask for support when I need it and to continually move towards what I desire.

The only way out is through. The last few years taught me that in ways I never want to have to learn again. You have to move through these things fully if you ever want to find yourself on the other side.

Because now you know.

Whatever the story, trauma, experience…
Let it be an explanation, NOT an excuse.

Because I won’t allow it to be.

Because I continually make the choice to rise above it. I continually choose to show up, face into what’s in front of me, and do the work.

It’s always a choice.
Even when it feels impossible.